ISLANDS IN THE GULF OF THAILAND 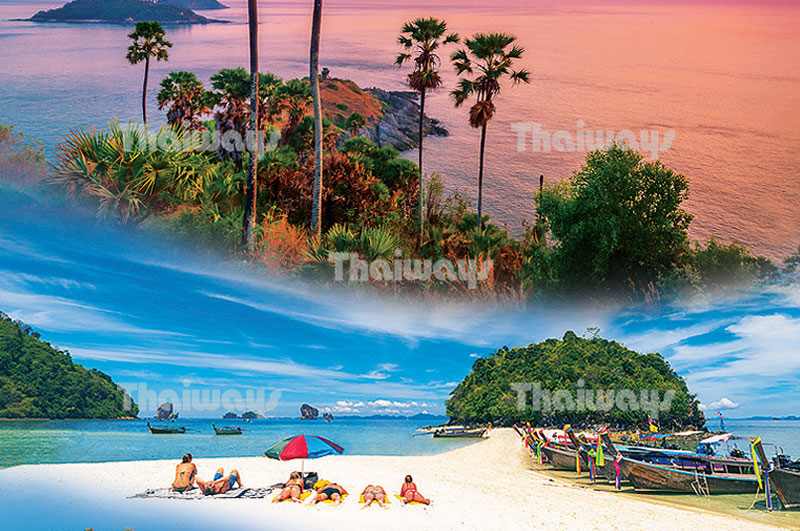 ISLANDS IN THE ANDAMAN

THE SYMBOL OF THAILAND

A Perfect Destination for Nature Lovers

SAFARI WORLD
Safari World is a drive-in zoological park divided into two parts. The first part is Safari Park, an open zoo with wild animals. The second part is Marine Park where there are a variety of marine animals and shows.
Find the cheapest ticket here.

Embarking on a stylish dinner cruise down the Chao Phraya river.

Performing on an enormous stage with advanced special effects.

The Grand Palace with its Royal Chapel (i.e., the Temple of the Emerald Buddha or Wat Phra Kaeo) is the place most frequented by foreigners. It was built after King Rama I ascended the throne as the founder of the Chakri Dynasty on 6 April 1782. He moved the capital from the west to the east side of the Chao Phraya River.

Then the King ordered the construction of a permanent palace together with a royal chapel to house the Emerald Buddha, which the King himself had recovered from Vientiane during the reign of King Taksin.

The Grand Palace and the Temple of the Emerald Buddha, occupying an area of 152 rai (i,e., 243,200 sq m or 60 acres) and surrounded by walls with battlements, have subsequently undergone many changes.

Old buildings were pulled down and new ones added. Only the middle part, where are situated the four groups of palace buildings named, from west to east, the Dusit Maha Prasat, the Chakri Maha Prasat, the Maha Monthian and the Boromaphiman Hall, will be described here.

One of the important buildings here is the convocation hall, called Ubosot inThai, where the Emerald Buddha, the most revered statue of Thailand, is enshrined on a high altar.

To the north of the convocation hall there is a higher terrace on which three important monuments, viz. the Royal Pantheon, the Mondop and Phra Si Rattana Chedi line up from east to west. Rivercity

Scattered in the temple grounds are numerous interesting sculptures of artistic value, including the fanciful animals in mythology on the terrace, the fierce-looking giants standing guard at the gates, the six pairs of Cambodian-style bronze lions in the front and at the back of the convocation hall, the stone figures from China, and the rows of colourful carved monkeys and demons placed along the bases of the pagodas as if to bear the weight of the structures.

Now let us go round the galleries which are the inside walls of the surrounding corridors, to admire the mural paintings which depict the story of Rama according to King Rama I's version of Ramakian (which was adapted from the Indian epic the Ramayana). There is a total of 178 connecting scenes starting from the right side of the northern gate facing the Mondop and going clockwise.

Going to the palace compound through the southern gate of the temple, you will see the four groups of buildings mentioned above. The one at your left is the Boromaphiman Hall, which was built by King Rama V for Crown Prince Vajiravudh as his residence. The next two kings also resided here. However, His Majesty the present King Bhumibol, moved to the suburban Chitralada Palace. The Boromaphiman Hall is now used to accommodate guests of the King and is inaccessible to the public.

Of the three other groups of palaces, the middle one, the Chakri Maha Prasat, was erected by King Rama V as his own residence. The 3-storey building is a mixture of Thai and Western architecture. The top covering is pure Thai with tapering spires and tiered sloping roofs, and the lower parts, designed by a British architect, are in the Imperial Victorian style. Only the ground floor is used now, the two wings for state banquets and the middle throne-hall for receiving foreign envoys on the occasions of the presentation of their credentials.

The other two, the Dusit Maha Prasat and the Maha Monthian, were among the earliest edifices constructed at the founding of Bangkok as capital. They are in the traditional Thai style modelled on the palaces in Ayutthaya. The Dusit Group at the western end was formerly used partly as an audience hall and partly as living quarters. The Maha Monthian to the east of the Chakri Group consists of three main adjoining buildings. They are, from the inside, the Audience Hall of Amarin where ceremonies of the court usually take place, the Phaisan Hall where the coronation of a monarch is held, and the Chakkraphat Phiman which was the residence of the first three Chakri kings and in which the later kings spent at least one night after the coronation.

Due to the limited space, the elaboration of the Grand Palace and the temple of the Emerald Buddha will end here. Nevertheless the impression you get from this visiting will never end.

THE LANDMARKS OF BANGKOK TOUR

The Landmarks of Bangkok Tour

The program including 4 temples and 1 palace: Wat Arun (The Temple of Dawn), Wat Benchamabopith (The Marble Temple), Wat Trimitr (The Golden Buddha), Wat Pho (The Temple of Reclining Buddha), The Grand Palace & The Temple of the Emerald Buddha (Wat Pra Kaew).

This authentic floating market is one of the most photographed places. It is located in Ratchaburi, about 100 km from Bangkok. Take a long-tail boat to the Floating Market where you will see the lifestyle of Thai people along the canal. Many vendors floating in their small rowing boats selling local food.

Maeklong Railway Market or Rom Hub is located on the railway track.

Alex Holiday is a Bangkok-based travel agent, operating tour services and providing hotel reservations all over Thailand. We specialize in cultural, trekking, adventure and golf tours as well as other tailor-made tour packages. We can organize all kinds of travel for you. More details...

Pattaya Beach is divided into the north, central and south zones. The beach offers excellent facilities for watersports enthusiasts of all kinds.

Underwater World Visitors are taken on a 'voyage to the bottom of the sea'.

Nongnooch Garden The most beautiful garden in Southeast Asia.

Patong is the most famous beach in Phuket. With its wide variety of activities and nightlife, it is an ideal place to relax, party and play.

This 7-km beach is the longest and the most popular beach on the east coast of Ko Samui. It has clean white sand and clear blue water.

A popular beach destination about 3-hour drive from Bangkok. Its long sandy beach with a relaxed atmosphere is great for family holiday.

We are a small private hotel close to Grand Palace. You'll discover peacefulness beyond expectation of any 3-star hotel in Bangkok, as one of our guests complimented us as "a hidden oasis". more details