About 60 kilometres from Chiang Rai, Chiang Saen is a small town on the bank of the Mekong River. The ruins of the earthen city walls and temples that scattered throughout the town are existing proofs of the Chiang Saen kingdom and thus are worth visiting especially for those interested in history.

The museum, located near the old city walls, is famous for its invaluable Buddha images and artefacts of the Chiang Saen Kingdom which flourished in the 11th and 12th centuries.

Located next to the museum, this ancient temple features the tallest pagoda in Chiang Rai. The 88-metre high brick pagoda is in the bell shape of the classic Lanna style. The stupa was built in circa 1290 by King Saen Phu, the 3rd king of the Lanna kingdom.

Wat Pa Sak is located approximately one kilometer west of Chiang Saen. With ornamental stucco motifs, the temple’s chedi, which is 12.5 meters tall with a base of 8 meters wide, is regarded as one of the most beautiful Lanna-style structures in northern Thailand.

This temple ruin, situated on a hilltop a few kilometers north of Wat Pa Sak, has a pagoda containing a Buddha relic. While on the hilltop, visitors can enjoy a good view of Chiang Saen and the Mekong River.

It is located 5 kilometres south of Chiang Saen along Highway 1016. This vast, scenic lake is home to large flock of migratory waterfowls which they are usually seen around November to February. Accommodations are available.

Located 9 km to the north of Chiang Saen town is this world-famous place where the borders of Thailand, Myanmar and Laos meet at the confluence of the Ruak and Mekong Rivers.

The Golden Triangle was formerly known as the world’s major producer of opium, which was later improved thanks to the works of the Royal Projects. Now the area is peaceful and dotted with hill tribe villages, ancient temples and markets.

This riverside temple was presumably built in the middle of the 8th century. It is located on a hill near Sop Ruak town just before the Golden Triangle. It offers spectacular views of the river, mountains, and Golden Triangle.

The Hall of Opium Museum is a combination of multimedia and exhibition to make learning more fun. Aiming to educate people about opium, this exhibition portrays every angle of the story, starting from the history of the Golden Triangle, the origin of opium, the opium war, opium warlords, drug smugglers, opium effects, the battle against opium and poppy growing, to rehabilitation of living conditions of the people who live in the area of the Golden Triangle, the former worldwide infamous drug trading zone.

The exhibition features the following zones : 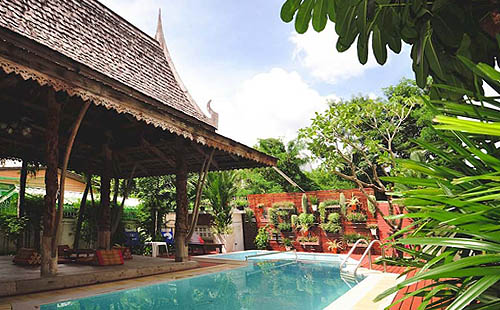 We are a small private hotel close to Grand Palace. You'll discover peacefulness beyond expectation of any 3-star hotel in Bangkok, as one of our guests complimented us as "a hidden oasis". more details